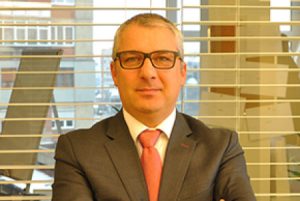 Mr. Visar Dobroshi is a Managing Partner in RECURA Financials, in charge of sales, HR and Corporate Governance. Visar has over 20 years of relevant professional experience in project management in infrastructure development, management consultancy and executive and oversight roles in senior positions and boards of directors. Visar has experience as a long-term expert in managing teams and in project management gained in the public or private sector or in donor funded projects in multiple long-term projects.

Before joining RECURA, Visar was engaged as the Chief Executive Officer at PRIMO, a subsidiary of Telekom Slovenia, in Tirana, Albania. Between 2002 and 2010, Visar worked in IPKO as the Chief Operations Officer, and later as a Head of Infrastructure, managing the Department of Planning, Implementation and Operations & maintenance for the company’s infrastructure and services. Between 1999 and 2002, he worked as a Project Assistant/IT Manager in ECHO – European Commission Humanitarian Office in Prishtina, responsible for monitoring projects financed by ECHO and implemented by international NGOs, with tasks ranging from project appraisals, budget analysis, to project evaluations.

Visar was also one of the initiators of the new Association of ICT Companies in Kosovo (STIKK) and was selected as the Vice-President of its first Board. He has also served in various executive and non-executive boards including the Board of the South East Europe ICT Private Sector Forum, representing the ICT sector in Kosovo; the Board of Governors of American Chambers AMCHAM in Kosovo and the Board of Primo Telecommunications in Albania. Currently, Visar is a mentor at CEED.

Visar is a graduated Civil Engineer from the University of Prishtina, where he tought as an Assistant Professor in Water and Sanitation and Hydro-technical subjects for over 14 years. Parallel to this, he worked in the ICT business, first as a private entrepreneur and as an executive in several telecommunications companies.